The abundance of wildlife and serrate landscapes is amplified on this 13-day expedition. This cruise offers two additional days to the Antarctic Classic itinerary for further exploration of the South Shetland Islands and Antarctic Peninsula. 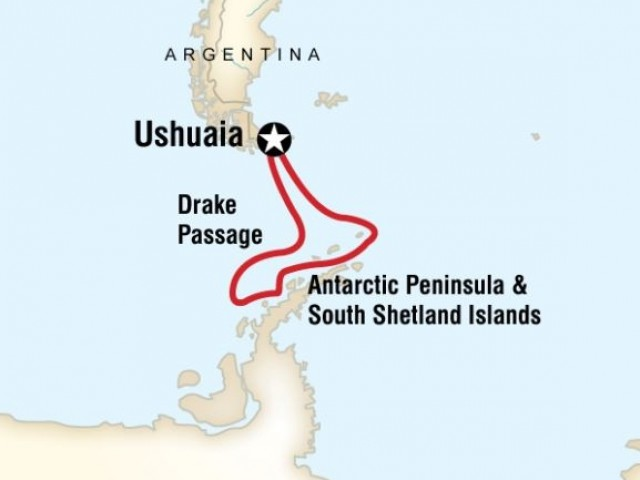 Arrive into Ushuaia, the southernmost city in the world, at any time. Make your own way to the hotel and enjoy the evening at leisure.

Sitting on the shores of the Beagle Channel, Ushuaia actually means "the bay facing westward" in the language of the original Yamna inhabitants. Once a penal colony (the presidio was disbanded in the 1940s) for political prisoners as well as hardened criminals, Ushuaia is now a major tourist attraction, particularly for people such as ourselves cruising to Antarctica. The town of 40,000 is also a major ski resort area for both alpine and cross-country skiers and offers magnificent hiking in Parque Nacional Tierra del Fuego, the only coastal national park in Argentina.

Today we will embark on the expedition ship. Embarkation time is set for 4:00 pm. The morning is free to do any last minute shopping, an optional excursion to Tierra Del Fuego National Park or a good hike up to the Marshall Glacier. The evening is spent on board the ship watching the sunset over the Beagle Channel.

Please note that while it is our intention of adhering to the itinerary described below, there is a certain amount of flexibility built into the itinerary and on occasion, it may be necessary, or desirable to make alterations. On the first day onboard, your Expedition Leader will give you an expedition overview.

Our adventure begins with a 400-mile crossing of the passage that bears the name of the 16th-century English explorer Sir Francis Drake. The M/S Expedition is at home in this part of the Southern Ocean, known for the unimpeded fetch of the winds that encircle the Antarctic. At some point on the second day, we cross the Antarctic Convergence, a meeting of cold polar water flowing north and warmer equatorial water moving in the opposite direction. This mixing pushes nutrient rich waters to the surface attracting a variety of seabirds, whales and other species.

As we make the passage you have time to become acquainted with the ship and frequent the common areas that include the lounge, dining hall, library and lecture hall where we meet our guides, ship's crew and expedition staff. We also begin the lecture and information sessions to learn the extraordinary human and natural history of the Antarctic region.

This is what we've all been waiting for—a chance to step foot on the Great White Continent! Over the next 6 days, we will navigate southwards making stops in the South Shetland Islands then through the Bransfield Strait and to the Antarctic Peninsula. Our goal is to attempt 2 excursions per day while we navigate through the area but our itinerary and daily schedule will be based on the local weather and ice conditions that we encounter.

The Antarctic Peninsula and the South Shetland Islands abound with wildlife activity. Penguins gather with their fast-growing chicks, whales are seen in great numbers, seals haul out onto ice floes and beaches, and numerous albatross and other seabirds trail in our wake. There is plenty of time to enjoy the sheer beauty and the breathtaking scenery of ice-choked waterways, blue and white icebergs, impressive glaciers and rugged snow-capped mountains. The Peninsula also has a remarkable history and, during the voyage, we will learn about some of the most important and dramatic expeditions to this remote corner of the world. Keeping a lookout from the Bridge or the deck of the ship, as we thread our way along the continent, you'll feel the same sense of excitement as many of those early explorers.

The continent itself is roughly circular with a spindly arm, called the Antarctic Peninsula, reaching northwards towards Tierra del Fuego. South America is the nearest landmass, some 600 miles away. Considerably larger than either the United States or Europe, and twice the size of Australia, the continent is surrounded by a frozen sea that varies in area from one million square miles in summer to 7.3 million square miles in winter. Ninety-five percent of the continent of Antarctica is ice covered and contains the freshest water on earth—about 70 percent of all fresh water on earth in fact. The highest point in Antarctica is Vinson Massif, with an altitude of 16,864 feet above sea level; the lowest point is the Bentley Subglacial Trench at 8,200 feet below sea level, located in West Antarctica. Antarctica has the highest average elevation of all the continents at about 7,500 feet above sea level.

Antarctica is a continent of superlatives. It is the coldest, windiest, driest, iciest and highest of all the major landmasses in the world. It is the continent with the longest nights and the longest days and it is home to the world's greatest concentration of wildlife. It is also one of the last true wilderness areas left on earth – largely unchanged since the early explorers and whalers first landed on its inhospitable shores less than two centuries ago. The lowest temperature ever recorded anywhere on earth, -128°F, was recorded on July 21, 1983, at Vostok Station. Winds have been recorded at 200 mph in the interior of the continent and the average annual water precipitation in the interior is only about 50 mm.

Thanks to the abundance of the small, shrimp like krill as the basis of the food chain, many species of whales make the water south of the Antarctic Convergence their summer home. Some of the species found in the frigid southern waters include: the Humpback Whale who consumes over a ton of krill each day; the Southern Right Whales easily identified by the whitish callosities on the jaws and forehead; the Sperm Whales made famous in Moby Dick; the Killer Whale which is actually not a whale at all but the largest of the dolphin family; the Sei Whale which can achieve speeds up to 55 km/h over short distances; the playful Minke Whales very common in the peninsula area; the Fin Whale who can attain a length of 25 to 27 meters making them the second largest whales; and the Blue Whale which is not only the largest whale in the oceans but also the largest animal that has ever lived.

The common name for all flightless, aquatic birds, penguins are only found south of the equator. Penguins have been grouped into 18 species and 6 genera, with most making their homes in Antarctica and the sub-Antarctic islands, though others are native to the coasts of Australia, South Africa, South America, and the Galapagos Islands. Penguins are speedy and agile swimmers, but extremely slow on land. The regions we visit aboard MS Expedition are inhabited by 6 different species including the giant King Penguin who can grow up to 1 metre in height (found only on South Georgia Island); the Adelie Penguin named after French explorer Dumont d'Urville's wife; the Chinstrap Penguin identified by the distinctive black line connecting the black cap to below the chin; the Gentoo Penguin with its orange bill and white flash above and behind its eyes; the Macaroni Penguin (Only on South Georgia Island) who number roughly 12 million and are easily identified by the orange tassels meeting between the eyes; and the Rockhopper Penguin (Only in Falkland Islands) who are similar to the Macaroni in appearance but slightly smaller and have yellow tassels.

Some of the bravest and best-known explorers have sailed south in search of adventure and recognition. James Cook, the most travelled explorer of his time, was the first to circumnavigate Antarctica and the first to cross the Antarctic Circle. Roald Amundsen, who led the first expedition to reach the South Pole and reached the pole on December 14, 1911. Captain Robert Scott, famous for being 35 days late, arriving at the South Pole on January 17, 1912, only to find the dark green tent and a note left by Amundsen. All 5 men in the Scott expedition perished on their way back from the pole. The best-known adventurer would have to be Sir Ernest Shackleton. On his attempt at the South Pole his ship, Endurance, was captured by pack ice in the Weddell Sea on January 19, 1915. The ship was destroyed by heavy ice, forcing he and his men to travel over the ice and sea to Elephant Island. However, because the island was uninhabited, Shackleton and 5 others made the 1300 km voyage for help to South Georgia, amazingly arriving at Stromness Harbour whaling station on May 20, 1916.

Today we leave Antarctica and head north across the Drake Passage. In between bird watching and whale watching and enjoying some final lectures by our expedition staff, this is a chance to relax and review the adventures of the past week before returning to Ushuaia.

And so our adventure comes to a close. We'll say our goodbyes as we disembark in Ushuaia in the morning.

The G Expedition provides an intimate small-ship cruising experience. Completely refurbished in 2009, she boasts spacious cabins, each featuring ocean-facing windows or portholes and private en-suite facilities. Large common areas and observation decks provide panoramic views of the distinctive landscapes of some of the world's most remote regions. The Expedition's spacious confines can hold up to 134 passengers. Many expedition cruise operators offer you a choice of space, comfort or expertise; the Expedition delivers all three at a price few can top. With a focus on safety, comfort and the unique demands of polar travel, the crew of the Expedition is committed to the ship's continued safe operation. 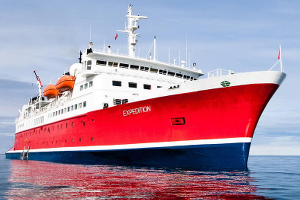