The fabled sea route connecting the Atlantic and Pacific Oceans, the Northwest Passage continues to grip our collective imagination. On this captivating 17-day voyage, we invite you aboard our game-changing new vessel, Ultramarine, to explore this fascinating waterway with an incredible range of on-board comforts and off-ship adventures no other vessel can offer. Passing through the Canadian Arctic archipelago, guests will journey back in time to the height of Arctic exploration, navigating the waters explored by sailors from different lands and visiting the sites that helped unlock the eventual discovery of this long-coveted route.

Aboard the technologically-advanced Ultramarine, you will explore this remarkable environment in unforgettable ways - taking advantage of two twin-engine helicopters, 20 quick-launching Zodiacs, the most extensive portfolio of adventure options in the industry, more outdoor wildlife viewing spaces than any other expedition ship its size - to create your quintessential Arctic experience. Marvel at highlights of the Canadian Arctic and Greenland's stunning west coast, stopping at traditional Inuit and Greenlandic communities. Participate in included helicopter activities and take in the vast, pristine Arctic wilderness from the air. Visit the UNESCO World Heritage site Ilulissat Icefjord, whose Jakobshavn glacier calves off icebergs up to a kilometer high. And keep your eyes peeled for the elusive and majestic creatures who make their home in this harsh, remote landscapes, such as whales, walrus, muskoxen and polar bears. Come aboard Ultramarine, venture to the fabled route that for centuries held explorers in its grip, and return home forever bonded to the spirit of Arctic adventure.

Save up to 25% on select dates and cabin categories when you book by April 3rd, 2023 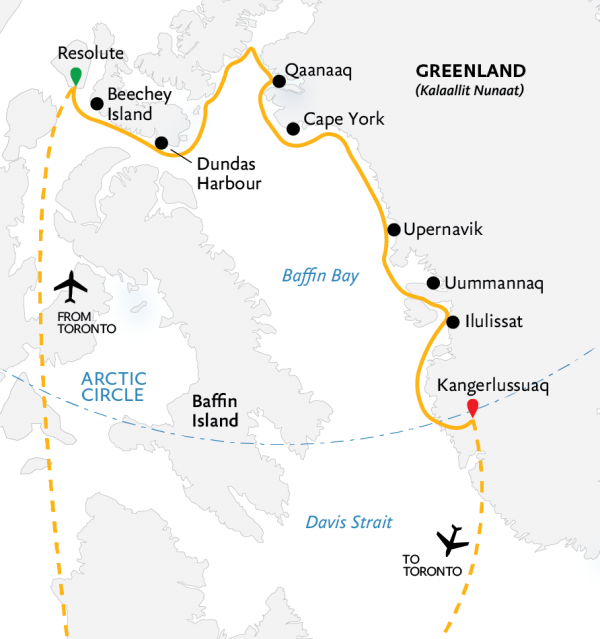 Ultramarine is designed to go beyond the familiar in polar exploration, to discover new places, and immerse you in the best the region has to offer. Equipped with two twin-engine helicopters, Ultramarine offers the most robust portfolio of adventure activities in the industry, the most spacious suites in its category, breathtaking public spaces, and more outdoor wildlife viewing spaces than other expedition ships its size. It also features a best-in-class 70-day operational range and an innovative mix of sustainability features that exceed all industry standards. 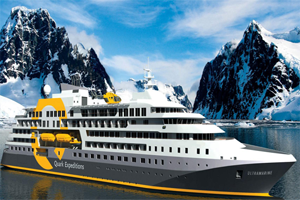