From the wild shores of Northern Norway to the bird cliffs of Bear Island to Svalbard's fantastic Bell Sund fjord system, this wildlife-centered expedition gives you the best of both the lower and higher Arctic. You might encounter blue whales, harp seals, kittiwakes, and many more memorable residents of the far north as you explore some of Earth's most dramatically sculpted scenery. 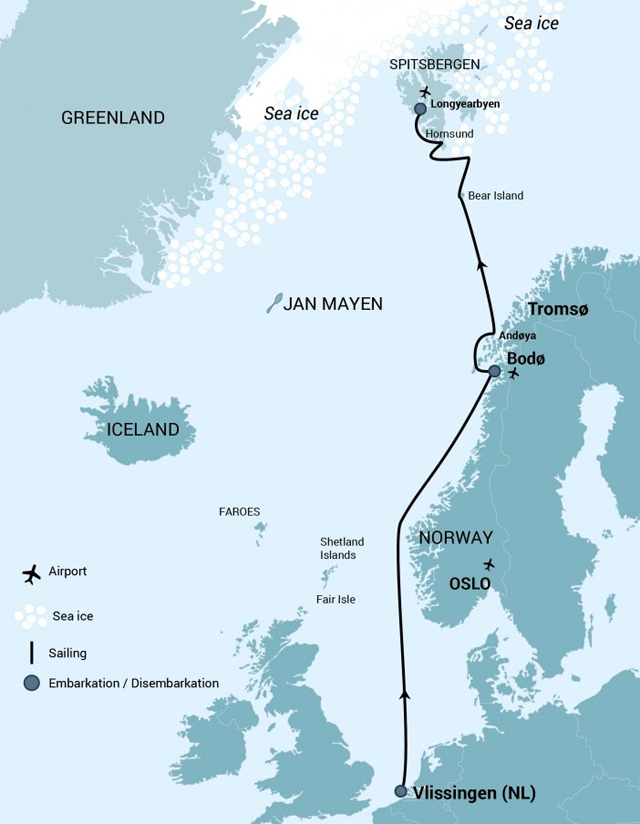 Search for whales, seabirds, and other exotic wildlife among the remote islands of Northern Norway and beyond.

Day 1: Northward bound We board the vessel at midday in the Dutch port town of Vlissingen, headed north. Far north. Day 2: Sea life on the move Crossing the North Sea and sailing by Dogger Bank, we stand an excellent chance of spotting minke whales, white-beaked dolphins, and harbour porpoises. Several other cetaceans, including orcas (killer whales), might also be seen in these waters. Day 3 – 4: North along the Norwegian coast We continue north along the Norwegian coast, sometimes close to shore and sometimes more distant. During these days at sea, keep a close lookout for spouts of water that may announce the arrival of minke, fin, orca, or blue whales. Especially near the famous fishing grounds of Fröya and Sklinna Banken, we have a decent chance of spotting these species. As we progress farther into the northern latitudes, you will notice the daylight lasting longer and longer. Day 5: Bodø near Saltstraumen Passing the Arctic Circle and sailing by Skomvaer and Røst, we may see several species of large bird around the mountains of southern Lofoten. Meanwhile we’ll sail among a multitude of small islands in the Norwegian municipality of Bodø, the center of the Nordland province, not far from the famous strait of Saltstraumen. More passengers will join our voyage in Bodø. Day 6: Searching for sperm whales near Andøya Today we sail close to the islands of Andøya and Bleiksøya, where we can see a beautiful seabird colony before positioning our ship. We’ll stop at the head of a submarine canyon roughly 10 km (6.2 miles) west of the northern end of Andøya. In this active area, sperm whales are known to emerge from depths of up to 1,000 meters (3,300 feet) after half an hour underwater. Day 7: Under the midnight sun and into the Barents Sea As we look for more whales and seabirds, we sail north into the Barents Sea. Here we get into the low Arctic waters, where the weather and sea can sometimes be rough. But the conditions will be worth it, as we should still be able to see many birds on their migration to the islands of Svalbard. Day 8: The seabird colonies of Bear Island We arrive at the southeastern end of Bear Island, a great place for viewing large seabird colonies. The nearby nesting cliffs are part of an extensive nature reserve where large ships are not allowed to sail. But with our Zodiacs, we might be able to cruise near colonies made up chiefly of Brünnichs guillemots and kittiwakes. Afterward we’ll sail northeast into Sorhamna, where we can get even closer to the seabird cliffs. Just north of this, in Kvalrossbukta, we will see the remains of a whaling station from early in the previous century. We might also make a landing in a shallow valley and look for (at a safe distance) great skuas, large seabirds known to be fiercely territorial. As we continue north along the east side of Bear Island, we may encounter dazzling shoals of drift ice. Day 9: Sailing among the sea ice Today we sail along and through sea ice drifting with the east Spitsbergen current. Near Sørkapp we may sail into Storfjorden to the east of Spitsbergen, where we have a good chance of seeing harp seals from the White Sea molting and lounging on the sea ice. Bearded seal sightings are also possible here, and the ice edge is a good area to look for fin whales. Day 10: Land of the Pointed Mountains If the sea ice is favorable, we’ll start the day by cruising the side fjords of the Hornsund area, taking in all the towering peaks: Hornsundtind rises 1,431 meters (4,695 feet), and Bautaen is a perfect illustration of why early Dutch explorers named the island Spitsbergen, meaning "pointed mountains." There are 14 sizable glaciers in this spot as well as opportunities for spotting seals, beluga whales, and polar bears. Day 11: Bell Sund’s flora, fauna, and haunting history Today we’ll continue to Bell Sund, one of the largest fjord systems in Svalbard. The ocean currents make this area slightly warmer than other areas in the archipelago, which leads to relatively lush vegetation. Here there are excellent opportunities to enjoy both history and wildlife. A possibility is Ahlstrandhalvøya, at the mouth of Van Keulenfjorden, where piles of beluga skeletons can be found. These remains of 19th-century whale slaughter are a sad reminder of unrestrained exploitation. Fortunately, belugas were not hunted into extinction, and we have a good chance of coming across a pod. As an alternative, we might cruise the side fjords of Bellsund, exploring tundra where reindeer like to feed and rock slopes where little auks often nest. Day 12: There and back again Every adventure, no matter how great, must eventually come to an end. We disembark in Longyearbyen, taking home memories that will accompany us wherever the next journey lies. But if you’re still craving additional chances to spot polar bears, stay on board for our seven-night North Spitsbergen voyage, "in search of polar bears & pack ice."