The Mid Atlantic islands of Tristan da Cunha, Saint Helena and Ascension are the most remote inhabited places on Planet Earth. This once-in-a-lifetime voyage on our very own vessel, Ocean Albatros, takes you to nine of the Mid Atlantic islands. Each of these islands is a paradise for birders and cetacean enthusiasts, promising a wealth of nature sights, from endemic species to breathtaking mountain and volcanic landscapes. Days at sea will be highlighted with amazing sea bird life, migrating whales as well as unique lectures by our expert staff - and of course delicious dining! 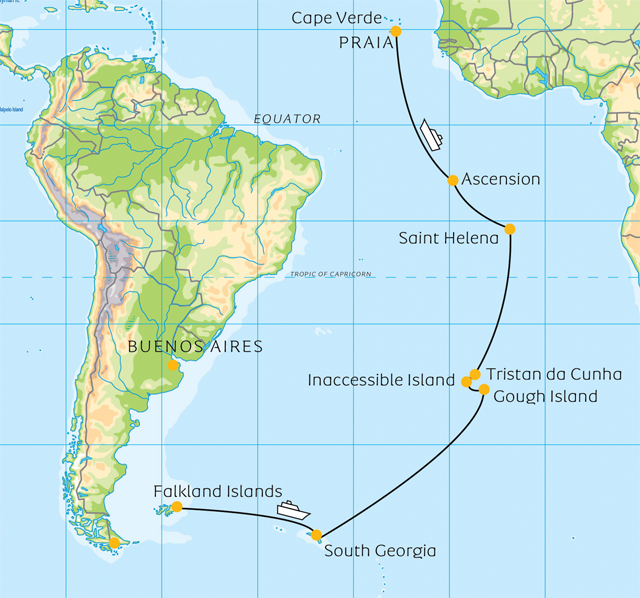 Our odyssey sets off from the Falklands, from where we go towards the enigmatic South Georgia Islands. Here we visit wildlife colonies and of course expect to find ample amounts of king penguins. Marking all kinds of endemic species and rare birds on our personal lists, we navigate towards some of the worlds most isolated islands, in the middle of the South Atlantic. The lava cliffs of Gough being our first glimpse of land that by our Zodiacs become a close encounter to a strictly preserved nature reserve. The following days we visit Inaccessible Island and Tristan da Cunha, places that only a very few people get to experience. Our voyage continues to exotic Saint Helena, where Napoleon Bonaparte was famously imprisoned. The end of our sojourn entails visits to Ascension island and we disembark at Cape Verde! By this time we have probably spotted more than 150 individual bird species.

The voyage takes place during March and April. The prevailing winds will be westerly during the first part of the cruise, until we reach Saint Helena and the southeast trade winds. In other words: tailwinds all along! In addition, we have the honour of having the world-renowned expert on seabird identification, Dr. Robert Flood, as guest lecturer.

Our brand-new expedition vessel Ocean Albatros offers all the comfort needed for this long voyage. It is specifically designed to provide a better expedition experience than any other ship. The patented X-bow and zero speed stabilizers provide a calmer ride and reduces discomfort for passengers with a tendency to seasickness. 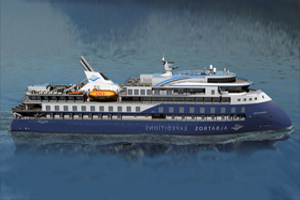