Europe meets North America in Iceland. At the edge of the Arctic Circle, Iceland is dominated by geology - and defined by the sea. While circling the island on the Ocean Endeavour, we'll witness the Earth in action: active volcanoes, emerging islands, lava fields, and glaciers. Viking descendants live in fishing villages scattered around the coast. Local folk share songs and stories handed down through generations. The landscape is otherworldly. Superb photography, birding, and hiking are a quick. 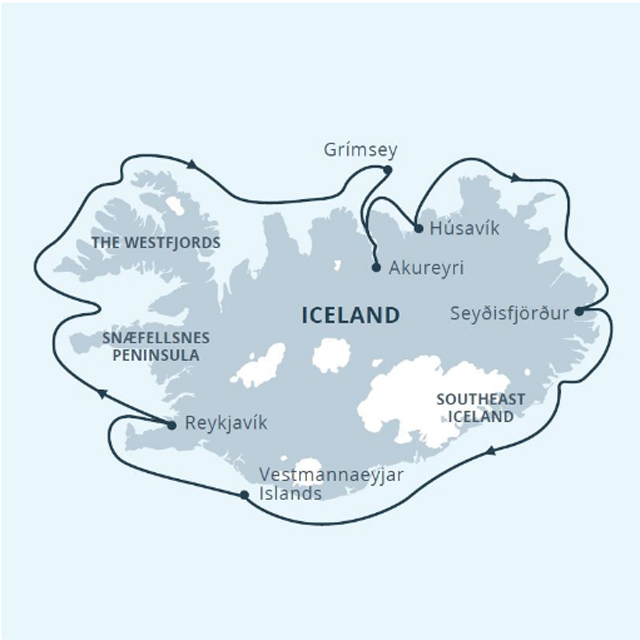 Day 1: REYKJAVÍK Iceland’s cosmopolitan capital, Reykjavík was established in 874 AD. Powered by geothermal energy, Reykjavík is widely considered one of the cleanest, greenest cities on Earth. Despite centuries of relative isolation, today Reykjavík is a contemporary city with plenty to see and do. The National Culture House preserves treasures like the Poetic Edda, and the Norse Sagas in their original manuscripts. We depart Reykjavík in the evening aboard the Ocean Endeavour. Day 2: SNÆFELLSNES PENINSULA The hundred-kilometer-long landscape of Snæfellsnes Peninsula is characterized by sparkling fjords, golden beaches, and undulating lava flows. The area is crowned by the glistening ice-capped stratovolcano Snæfellsjökull, 700,000 years old and immortalized in Jules Verne’s Journey to the Centre of the Earth. On clear days, the mountain can be seen from Reykjavík, 120 kilometers away. A few small settlements are located on the south side of the peninsula, and fishing villages can be found on the north. Day 3: THE WESTFJORDS Only about ten percent of Iceland’s visitors ever see this region, known for its jagged bird cliffs and multihued beaches. Coastal fjords, immense mountains, and tiny villages can be found here, and a traditional lifestyle is embraced by the region’s inhabitants. Day 4: NORTHERN ICELAND AND GRIMSEY Iceland’s north is a geologist’s dream. Lava fields—almost lunar in their composition—epic waterfalls, snowcapped peaks, and bays teeming with marine wildlife are characteristic of the region. Grimsey Island lies on the Arctic Circle. Its human population of about a hundred shares the island with nearly a million seabirds! These include puffins, guillemots, and gulls. Day 5: AKUREYRI Iceland’s second-largest urban area, Akureyri enjoys a relatively mild climate and ice-free harbor. In addition, Akureyri is surrounded by mountains, which shield it from strong winds. First settled in the ninth century, Akureyri provided a base for Allied units during the Second World War. Nearby Lake Myvatn offers stunning contrasts: one side of the lake features rugged volcanic remnants, while the other side is blessed with lush vegetation and varied bird life. Day 6: HÚSAVÍK Húsavík, on Skjalfandi Bay, is known as the “Whale Capital” of Iceland. Fifteen different whale species frequent the area; we also hope to see dolphins, and thirty varieties of birds. The Húsavík Museum is located by the harbor. There are also numerous other museums including the Exploration Museum, which houses artifacts from Apollo astronaut training in the area; a whale museum, and a turf house museum. Day 7: SEYDISFJÖRDUR Seydisfjördur is nestled at the tip of its namesake fjord. The town of seven hundred is known for its flourishing art scene, colorful roads, and shopping. We will also have the opportunity to visit the Skalanes Nature Reserve. Family owned and operated, this is a center for research and interpretation of Iceland’s environment and cultural history, and a model for sustainable tourism. The 3,000-acre area is a habitat for approximately fifty different bird species during the summer time, and, in particular, the eider duck. Day 8: SOUTHEAST ICELAND The south of Iceland is home to some of the country’s most beautiful natural attractions. It boasts a unique mix of volcanoes, lagoons, glaciers—as well as hot springs, geysers, and spectacular waterfalls. Day 9: VESTMANNAEYJAR (WESTMAN ISLANDS) Vestmannaeyjar lies off the south coast of Iceland and comprises fourteen islands, numerous rocks and skerries. Only the largest island, Heimaey, is inhabited. Numerous species of seabirds nest in the steep rock faces along the ocean cliffs. The volcanically active area has seen two major eruptions in recent times: the formation of the island of Surtsey in 1963, and the Eldfell eruption ten years later that destroyed much of Heimaey and nearly blocked its harbor. Day 10: REYKJAVÍK Reykjavík, or “steamy bay”, is a cosmopolitan capital city and as much a part of the Icelandic experience as the midnight sun or the fire and ice that creates the island’s landscape. Today we disembark the Ocean Endeavour and transfer to the airport.

The Ocean Endeavour is the perfect vessel for expedition cruising. Outftted with twenty Zodiacs, advanced navigation equipment, multiple lounges, and a top deck observation room, she is purpose-built for passenger experiences in remote environments. The Ocean Endeavour boasts a 1B ice class, enabling her to explore throughout the Arctic summer. At 137 metres in length, the Ocean Endeavour has plenty of interior and exterior space. Ample deck space ofers comfortable lounge chairs, a swimming pool, two saunas, and a hot tub. The spacious interior allows for varied workshops and presentations to occur simultaneously. The three lounges aboard the Ocean Endeavour are optimal locations for seminars, events, parties, and conversation. 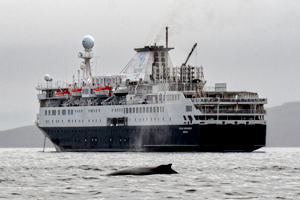